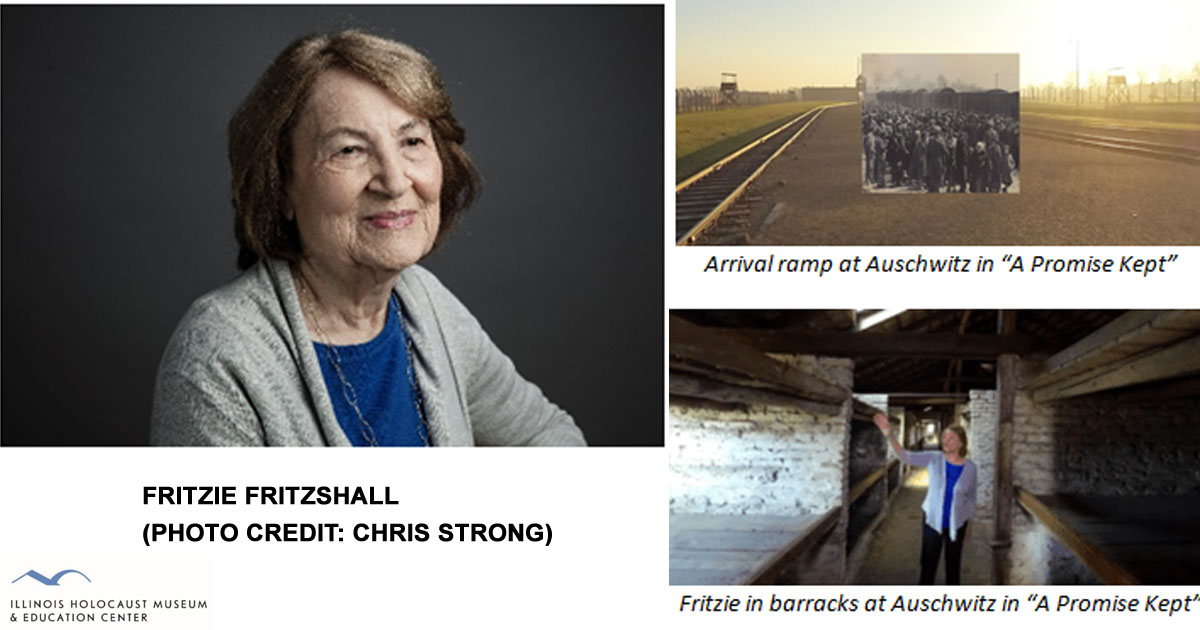 She was one of three children cared for by their mother while their father, Herman Weiss, immigrated to the United States before World War II to create a pathway for the rest of the family to follow. However, when the Nazis invaded Czechoslovakia in 1944, Fritzie and her family were forced into a ghetto before being deported to Auschwitz.

Fritzie's call to activism began in the late 1970s when neo-Nazis threatened to march through the streets of Skokie. The terror and outrage of seeing swastikas in their community galvanized a group of Survivors to establish the Holocaust Memorial Foundation of Illinois in 1981 to fight bigotry with education. The Foundation was a small but passionate operation housed in a modest storefront on Skokie's Main Street.

Fritzie along with 20 Chicagoland Holocaust Survivors, who were meeting in one Survivor's basement, had the dream of one day opening an educational institution that would preserve Survivor stories and teach the lessons of the Holocaust to current and future generations.

In 1990, Fritzie, with other Survivors, convinced Governor James Thompson to sign the first Holocaust Education Mandate into law, making Illinois the first state in the country to require the teaching of the Holocaust in all public elementary and high schools. “I want to encourage teacher training and student learning about man's continued inhumanity to man,” Fritzie said.

In 2009, Chicagoland Survivors' long-held vision of opening a world-class educational institution became a reality with the opening of Illinois Holocaust Museum & Education Center on Woods Drive in Skokie. It is the third-largest Holocaust museum in the world, and, since 2010, Fritzie served as its President.

Under Fritzie's leadership, the Museum grew to inspire more than 285,000 individuals annually, teaching them to stand up for what is right – transforming powerful lessons of history into positive actions today. The Museum has also received national acclaim, including recognition as a 2017 recipient of the National Medal from the Institute of Museum and Library Service, the nation's highest award to a museum.

“Fritzie was the heart and soul of our Museum,” said Susan Abrams, CEO of Illinois Holocaust Museum & Education Center. “She played an important role in the Museum transforming from regional player to global leader, sharing her story of survival and its lessons through cutting edge technology including interactive holograms and virtual reality film. I regularly watched in awe as Fritzie mesmerized audiences with her story and its lessons. All who were touched by her will never forget. She was an inspiration to me and to so many others.”

“She was concerned that the world would not remember the horrors of Auschwitz” said Ms. Abrams.
“To address that, this year the Museum will premiere A Promise Kept, a virtual reality experience where visitors can stand with Fritzie as she returns to Auschwitz and tells the story of the promise she made to 599 women who, with each crumb of bread, kept her alive during the Holocaust,” she noted.

“Building on her commitment to innovation in support of Holocaust education, this is the first time that virtual reality technology will be used to archive, preserve, and produce Holocaust Survivor testimony in Auschwitz,” Ms. Abrams added.

Holocaust Survivor
The Nazis occupied Fritzie's hometown of Klucharky, Czechoslovakia, and deported Fritzie, her mother, and two brothers to Auschwitz-Birkenau concentration camp when Fritzie was just a young teenager. Her mother, two younger brothers, and other family members were murdered.

“There is no way to describe what it was like to be in the rail car hungry, cold, without food, without water, watching pregnant women begging for water, watching different people dying in front of you from lack of food, air, and water,” Fritzie said. “My own grandfather died in this car going to Auschwitz.”

To survive, she pretended to be older than she was. Fritzie endured a torturous year in Auschwitz and a related Nazi labor camp, where she worked doing slave labor in a factory. In 1945, she was finally liberated by the Soviet Army after escaping into a nearby forest during a death march.

After the war, in 1946, Fritzie came to Skokie, Illinois, and reunited with her father, who worked for Vienna Beef and had come to America before the Holocaust to provide his family with money from abroad. Fritzie married a U.S. veteran of World War II who had been a prisoner of war in the Pacific, and she made a life for herself in Chicagoland as a hairdresser, becoming an avid Cubs fan in the process.

As a Survivor of the Holocaust and the President of Illinois Holocaust Museum & Education Center, Fritzie Fritzshall devoted her life to combatting hatred and prejudice, inspiring people to become Upstanders instead of bystanders, and speaking out to make our world a better place.

She tirelessly fought hatred, telling her harrowing story of survival and articulating her insights on current issues, including the rise of antisemitism and the refugee crisis.

Innovator
During Fritzie's presidency, Illinois Holocaust Museum envisioned and developed interactive 3D holograms of Survivors as a way to preserve Survivor stories in the most impactful way for generations to come. Studies show that hearing Survivor testimony has a profound impact on how an individual relates to the history of the Holocaust.

Making its world debut in 2017, the Abe & Ida Cooper Survivor Stories Experience was named one of the 12 must-see exhibitions globally by Smithsonian Magazine and featured on 60 Minutes. The theater experienceallows Museum visitors to engage with holograms of Survivors who lived through the Holocaust. It utilizes Dimensions in Testimony, developed by USC Shoah Foundation in association with Illinois Holocaust Museum, and enables people to ask questions that prompt real-time responses from pre-recorded video interviews with Holocaust Survivors. Fritzie is one of the holographic recordings.

Fritzie endured five grueling days of answering thousands of probing questions about her experience before, during, and after the Holocaust in order to share her story for generations to come.

About Illinois Holocaust Museum
Illinois Holocaust Museum & Education Center honors the Survivors and victims of the Holocaust and transforms history into current, relevant, and universal lessons in humanity. Through world-class exhibitions and programs, the Museum inspires individuals and organizations and provides a universal wake-up call to action: Take history to heart. Take a stand for humanity. The Museum is open Wednesday through Sunday from 10:00 AM through 5:00 PM with last entrance at 4:00. For more information, visit www.ilholocaustmuseum.org or call 847-967-4800.