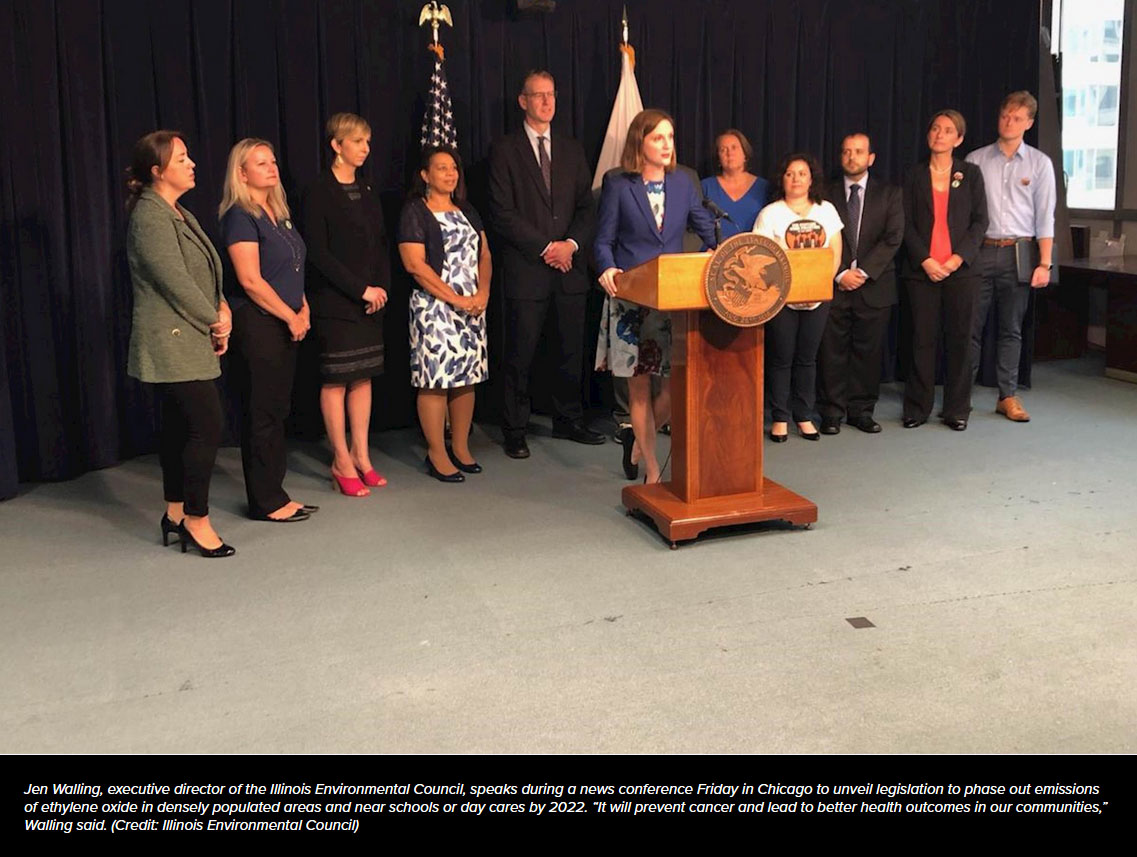 SPRINGFIELD — A coalition of advocacy groups and lawmakers from both parties unveiled a bill Friday that would phase out emissions of a cancer-causing gas in densely populated areas and near schools or day cares by 2022.

The measure, House Bill 3888, was announced at a Chicago news conference and is the latest step in a highly publicized series of legislative and advocacy efforts to regulate or ban the use of ethylene oxide in Illinois. Ethylene oxide is a gas used in sterilization and manufacturing processes that has been linked to higher cancer rates in communities surrounding the companies that use it.

Sponsored by Waukegan Democratic Rep. Rita Mayfield, the bill provides that by 2021, no sterilization company can use ethylene oxide within five miles of a region with a population density of at least 10 residents per square mile, or within the same distance from a school or day care.

Hospitals that use the gas in sterilization processes would have to meet the same requirements by January 2022, while critical access hospitals would have until 2025.

Hospitals and sterilization facilities outside of dense areas and not within range of a day care or school would be allowed to emit no more than 30 pounds of ethylene oxide annually.

“These sterilizers and hospitals will now be required to present a plan to the Illinois Environmental Protection Agency detailing how they plan to reduce and eliminate emissions by their required deadline,” Mayfield said, adding the plans will be published to the IEPA website. “IEPA is also required to finally, finally, investigate and report on ethylene oxide use and emissions across the state of Illinois, and take charge and recommend future legislation and regulations to maximize protection to public health.”

In August, a spokesperson for the IEPA said there are 26 facilities in Illinois permitted to use or emit ethylene oxide.

The ethylene oxide emitter in the state with the highest profile is Sterigenics, a medical supply sterilization company in the DuPage County suburb of Willowbrook. The company began facing backlash for its ethylene oxide emissions in August 2018, when the public learned of an increased cancer risk in the surrounding area. The IEPA issued a seal order in February preventing it from using the gas.

“This is a dangerous cancer-causing agent, and as we’ve learned more we realized the emission of ethylene oxide in an area where people breathe is wrong,” he said at the news conference Friday. “Through the study that has taken place in the last 13 years, we have tragically seen increased elevated cancer rates around Willowbrook due to ethylene oxide coming from Sterigenics. It’s time that this ends.”

Legislators passed a pair of bills in May that were signed into law in June, and both sides of the aisle hailed them as the strictest regulations of ethylene oxide in the nation. The good feeling surrounding the legislative effort did not last long, however, as details of a legal agreement that would allow Sterigenics a pathway to reopen became public in July.

That consent order, approved last week, led to a new wave of legislative efforts and public statements from lawmakers and advocates that wanted the company to remain closed.

“This bill … puts public health first on a statewide basis, limiting and phasing out releases of carcinogens into the air people breathe. It is a strong compliment to Leader Durkin’s recently introduced bill that empowers municipalities to say no to toxic emissions,” said Margie Donnell of Stop Sterigenics.

Members of the grassroots group Stop EtO in Lake County were also in attendance at the news conference Friday. That group has been rallying against chemical producer Vantage Specialty Chemicals in Gurnee and industrial medical sterilizer Medline Industries in Waukegan, two ethylene oxide emitters linked to increased cancer risks in those areas as well.

The measures could be taken up in fall veto session, when the General Assembly returns the last week of October and in early November to consider new legislation. Advocates for the bill said they expect opposition to the bill and some potential changes to the language despite optimism for its passage.

“Anything where you’re phasing out or banning a chemical is going to be difficult. And I think that this is going to have opposition from several industry stakeholders,” said Jen Walling, executive director of the Illinois Environmental Council. “I think that the governor is excited to sign a strong piece of legislation that would come to his desk.”

Pritzker’s office has previously said it would support ethylene oxide legislation “up to and including a ban” on the gas. On Friday, Pritzker spokesperson Jordan Abudayyeh said the governor was encouraged by the latest effort.

“The administration is very encouraged to see stakeholders come together around additional ideas to protect the health and well-being of residents who live near facilities that emit ethylene oxide. While we haven’t yet had a chance to review this legislation, we’ll closely evaluate it, and we look forward to subject matter hearings to discuss the substance of this and other proposals to protect people’s health. We are committed to reaching a solution in the veto session,” she said.